Photography, Paintings and other creative works

I’m not really sure why, because I was never a fan of the city, but I LOVE New York City!!  I went for the 3rd time last weekend with a great friend of mine- see, here we are in Central Park!

My first time there, I rode the tour buses, went up the Empire State Building, walked around the village and Central Park and even took a carriage ride (they were much less expensive then!).  Last year my husband and I took our 3 daughters and took the train in for a day.

Last weekend I did the tour bus again but got a few extras, including a great tour guide- his name is Sherwood and I’m sure we’ll never forget him!  On Friday, we went to the Top of the Rock.  Now, I did most of our planning and Chris went along with it- and she did not know what Top of the Rock was.  She admitted to me afterwards that she thought we were going somewhere to climb a rock!  (For those of you that don’t know, it’s an observation tower in Rockefeller Center)!  So, on Saturday when we went to Central Park I made her climb an actual rock! 🙂  That evening we went to the deck of the Empire State Building– absolutely breathtaking at night- a sight I’ve never seen before 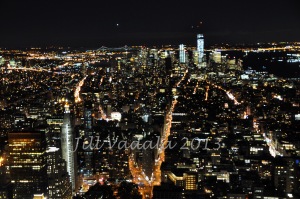 We rode the tour buses all weekend taking in the sites.  Sunday morning we took a sightseeing cruise that was included in our package- another first!  Views from the Hudson and East Rivers, the bridges over the East River and the Statue of Liberty!  After the cruise we hopped on the uptown bus- I’ve never been to Hell’s Kitchen, Harlem or saw the north part of Central Park or Museum Mile.  Lots of great memories, and over 1200 pics to go with it!  Please check out my photo website at jillscreativeendeavors.weebly.com to see a few of my favorites!

Ah, summer is over but nothing has slowed down!  School started a week after we got back from vacation, Rae made the West Seneca Magic Softball team (travel softball), Nina is going to a softball clinic every other Sunday, Girl Scouts started up and Juli’s going to be 4 this week!  (How did my baby get so big????)

So, anyway, I had to post about our vacation.  It started out wanting to take a few days and go to the Herkimer Diamond Mines.  However, other than the diamond mines, there is NOTHING to do there!  So, I was looking around that side of NY and casually mention to the husband, if we’re that far we should go another couple hours and go to NYC and he said “YES!  Let’s!!”.  Wow, really?  I was being sarcastic…but that changed our vacation!!  I booked a hotel in Nanuet, about 20 miles north of Manhattan.  We drove down on Monday and hung out in near the hotel.  Tuesday morning we got up, drove to Tarrytown and took the train to Grand Central Station- the kids were in awe!!  Even me, I walked out onto 47th Street and thought, “wow, I’m really here!” (I was there back in 2006 but have wanted to go back- I love NYC!)

We walked from 47th and Madison to 5th Ave then all the way down to the Flatiron Building.  Then headed up Broadway to Times Square.  Juli was in heaven in the Disney store- she wanted to buy everything and settled on a Statue of Liberty Minnie Mouse and a tshirt!  The girls held the World’s largest Hershey bar in Hershey world.  We took a subway ride downtown to see the 9/11 Memorial.  So sad.  We walked down to Battery Park, saw the Statue of Liberty, then took the subway uptown to Central Park.  Got ice cream from a street vendor. Played in the park.  Walked down 5th Ave and back over to Times Square.  Did some souvenir shopping and took the train back to Tarrytown.  I wish I knew how many miles we walked.  Got there a little before 9am and took the 8:30pm train back.  Took over 500 pics.

at Broadway and 5th

On Wednesday we had a nice breakfast and headed to Long Island to spend some time at Jones Beach.  Our first time swimming in the Atlantic Ocean!  However, to get there, I had to drive across the George Washington Bridge (the busiest bridge in the world- over 102,000,000 vehicles cross that bridge every year).  SCARY!!!!  Took us over an hour to cross the brige, traffic was scary crazy.   We made it to the beach but couldn’t really do much swimming.  The waves were huge- we stood there and let them crash into us!  One knocked Juli down and pushed her up the shore- she got up, said “that’s it.  I don’t like this beach anymore” and stayed out of the waves!  The older girls LOVED the waves!

Playing in the waves

Running from the waves!

We headed out Thursday morning and did make it to the Herkimer Diamond Mines- we didn’t find much but just as we were ready to give up I found a rock with a couple bigger diamonds in it!

Feel free to email me at:

Find me on RedBubble:

Take a look at my new website for my photography:
http://jillscreativeendeavors.weebly.com/